A Lesson in Democracy

Yesterday, the Indian government survived a critical vote of confidence in the parliament on the nuclear pact with the United States. The vote was so close that political parties pulled all stops to ensure all their members show up for the vote. Some members were wheeled-in from their hospital beds. Some others were granted day pass from the jail to be able to exercise their democratic right to cast their vote and then return back to their cell (this is absolutely true!).

There are unconfirmed reports that efforts were made to revive recently deceased MPs and get their voices heard and their vote counted. Arrangements were also made to keep some of the MPs awake who usually take a nap in the House, by giving occasional buz to their Black Berries or cell phones, so that they don't miss the vote.

There were allegations of bribes, threats, blackmails, defections, etc from all sides. Opposition members brought two duffel bags full of cash into the assembly building alleging the prime minister's allies had attempted to buy votes with the money. 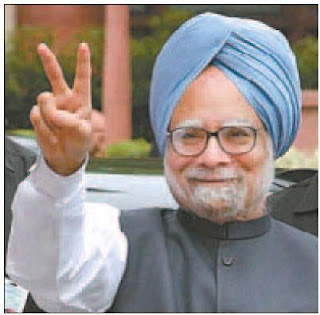 When asked how many billions of rupees were offered as bribes, the Indian Prime Minister responded in sign language.

After the vote Prime Minister Manmohan Singh declared, "This vote gives a clear message to the world that India's head and heart are sound and India is prepared to take its rightful place in the comity of nations." One might have difficulty accepting the first part of this statement, however Mr. Singh is absolutely right about the second part. India is now a proud member of the club which includes countries like Canada, Italy and Israel where similar democratic traditions were in full display in similar no confidence votes in recent years.

Representatives from Pakistan and Zimbabwe also attended the Parliament session as observers. When asked to comment on all the bru ha ha surrounding the vote, the Pakistani rep gave a one word response - "Amateurs!" "India is making good progress to finally becoming a truly democratic country," declared the Zimbabwe rep.