When the grief strikes …

A passenger plane has crashed in bad weather in the hills somewhere. All 152 passengers died. No survivors!

News like this are not uncommon. You feel sad about the deceased and their families and move on. Except that in this case the crash occurred at Margalla Hills near Islamabad, Pakistan on July 28, 2010. And one of the passengers was my brother, Ali Akber. Not just any brother, but my very dear baby brother, the youngest of eight siblings. Now that hurts! In fact to say that it hurts is an understatement of grand proportion.

They say that time is a great healer. However, I always wondered why the loved ones of the people who die in a tragedy are not able to get over it and move on even after many years. A case in point is the Air India flight from Montreal to Mumbay which was blown up off Irish coast in a terrorism act in 1985. Recently, the families of the victims marked the 25th anniversary of this tragedy by holding ceremonies in Ireland, Canada and India. When I saw them speaking on television I could not understand at that time why there still was so much pain and anger in their voice and on their faces even after such a long time. Now I understand.

How does one cope with a grief like this? I have been grappling with this question for the last two weeks. Your faith and your belief system play a key role at such a time. And that is what I am counting on. It has helped that the holy month of Ramadan started soon after this tragedy. This Ramadan I have a lot to reflect upon the life and its fragility. One phone call in the middle of the night can change every thing in your life.

Day and night I think of you 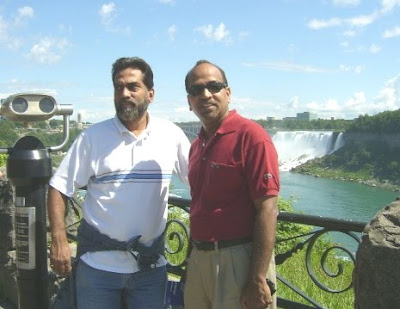 How can all this be true?
I still can't believe you're really gone
Even though a week has now bygone
Just the thought of you makes me cry
I never even got the chance to say goodbye
All I've left now is a memory lane
Until some day we meet again!

Father's Day -- Without a Father

Last Sunday was the Fathers Day and this time I did not have a father to call and wish him. It finally dawned on me that this day is now meant for me. Although I have been a father for the last two decades, and the kids do their best every year to mark the occasion, it always seemed that, at least in my family, it was reserved for my dad alone. Any thought of my sharing the day would have been disrespectful to him.

So this Father's day has a new meaning for me. Instead of the ritual wishing to Dad, this year I am reflecting on his life and times ...
Posted by Zahid at 8:06 PM No comments: